The Official Launch of SJTU School of Emergency Management in Xuhui

On November 18th, SJTU’s Bulgarian Center and the School of International and Public Affairs co-hosted 2020 “China-Central and Eastern Europe” International Scientific Forum. The event is co-sponsored by Shanghai Jiao Tong University and the University of National and World Economy (UNWE) in Bulgaria. This forum took place both virtually and in-person on SJTU’s Xuhui campus, in the Xinjian Building.

In the opening ceremony of the forum, we received welcoming words from leaders of the sponsoring organizations, including General Consul of the Republic of Bulgaria in Shanghai – Mr. Dimitar Pampoulov, Shanghai Jiao Tong University’s Vice President – Ms. Xuemin Xu, and Rector at the University of National and World Economy –Mr. Dimitar Dimitrov. The event’s keynote speech, “China-CEEC Cooperation Future”, was delivered by the President of the Chinese Association of World Politics Studies, former Director General of the Chinese Academy of Social Sciences and the Institute of European Studies – Mr. Ping Huang.

The speakers and attendees of the forum consisted of more than 30 subject matter experts from 20+ organizations such as Chinese Academy of Social Sciences, SJTU, Fudan University, Tongji University, Beijing Foreign Studies University, Beijing International Studies University, UNWE, Bulgarian Sofia University, Institute of Agricultural Economics in Sofia, University of Belgrade, Tirana Agricultural University of Albania, Budapest Institute of Agricultural Economics, St.Kiril-Meto of North Macedonia, and more. Everyone gathered both online and offline to engage in a discussion on the further development of and cooperation between China and Central & Eastern European Countries. The event was hosted by SIPA Party Secretary, Mr. Wenning Jiang. 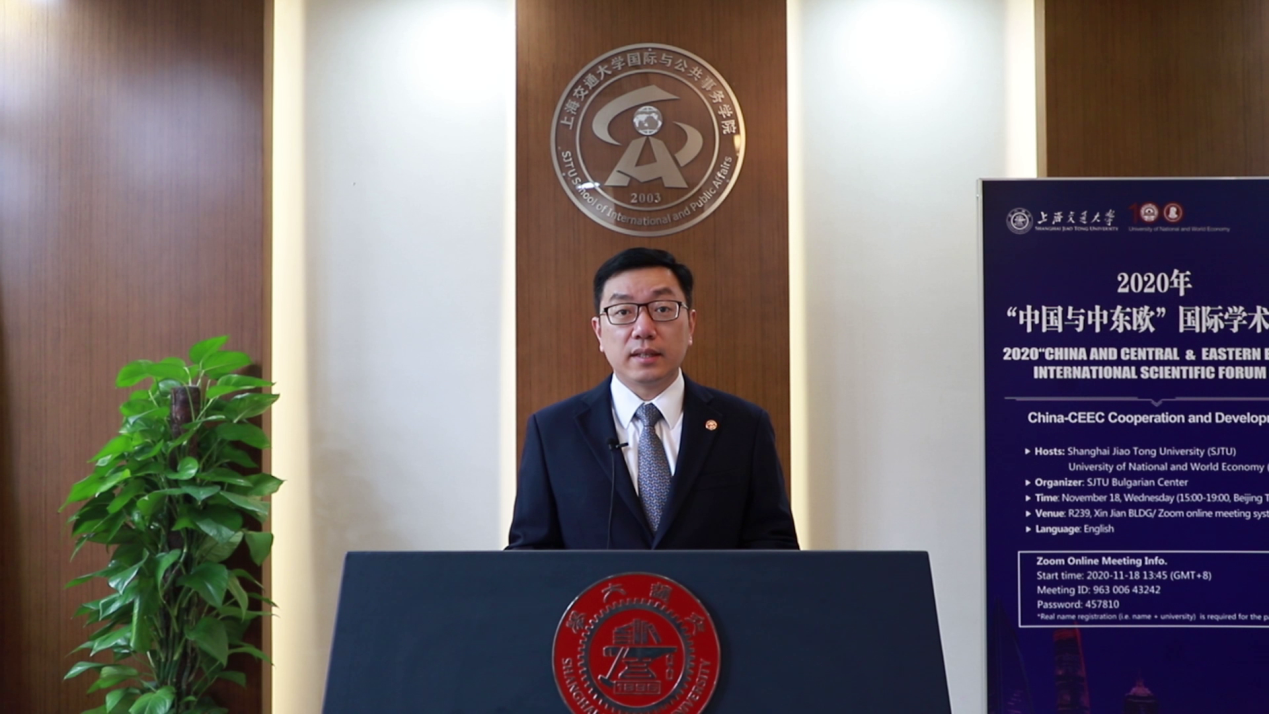 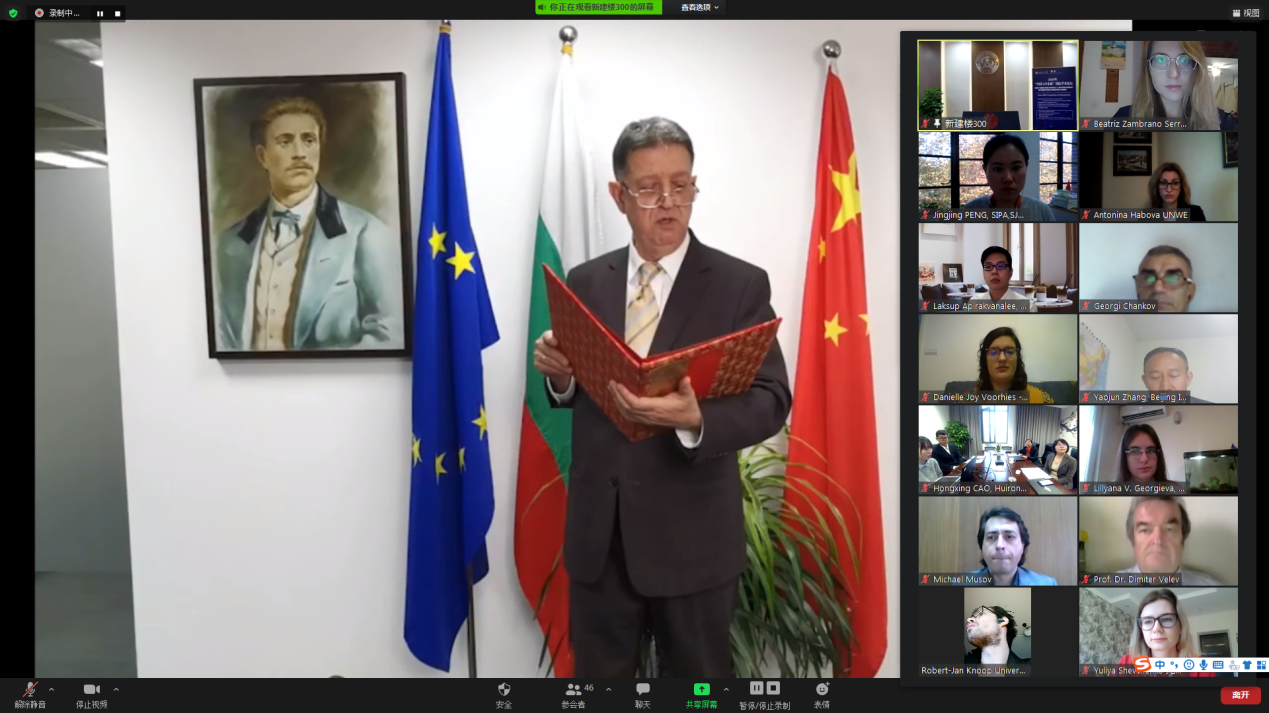 In his virtual opening remarks, General Consul Dimitar Pampoulov expressed his gratitude for all the work that had been carried out by the SJTU Bulgarian Center, especially in the face of a pandemic. This is a true portrayal of the promised partnership between Chinese and Bulgarian institutes of higher education, and he wished the forum a great success. 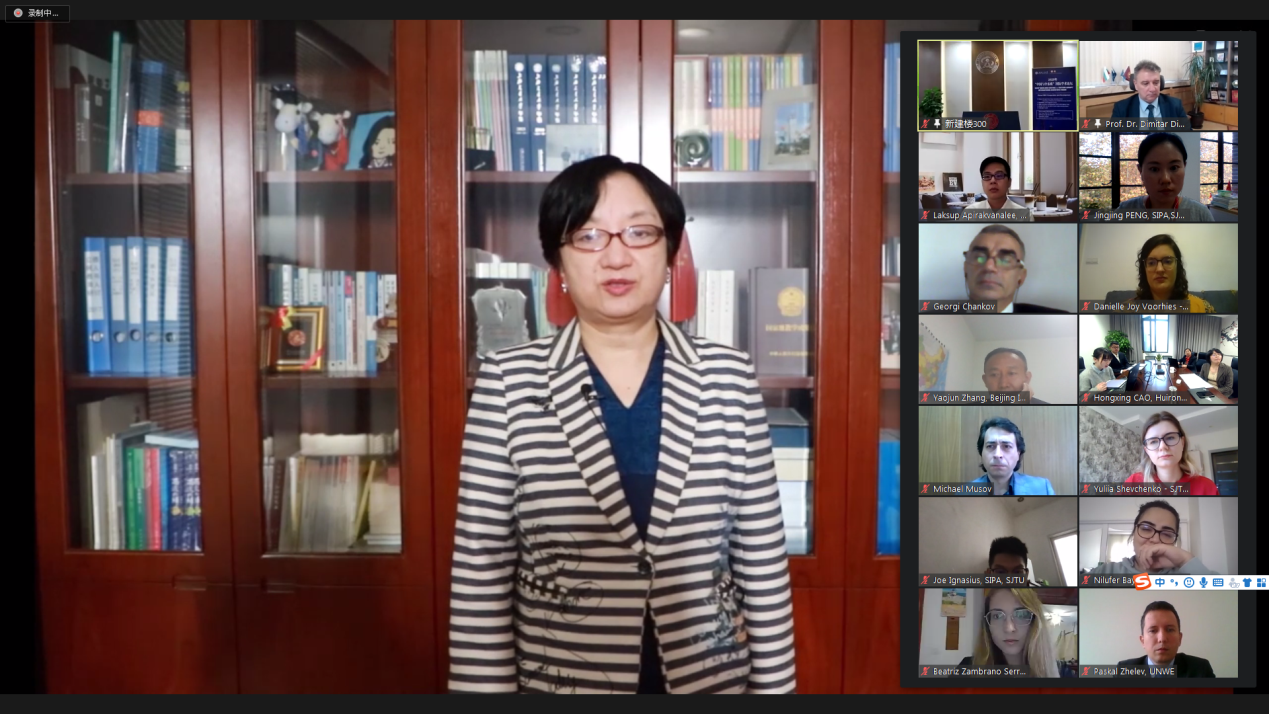 Next, Vice President Xu from SJTU delivered her welcome. She reviewed the history of the close cooperation between SJTU and universities in the central and eastern European region, and highlighted the establishment of the SJTU Bulgarian Center as a platform and a bond in implementing the “17+1” and “Belt and Road” initiatives. In July of 2019, during his visit to China, Bulgarian President Rumen Radev also visited and spoke at the Bulgarian Center. At the end of her speech, Vice President Xu expressed her confidence in this partnership, and looked forward to more extensive exchanges and cooperation between China and central and eastern European countries. 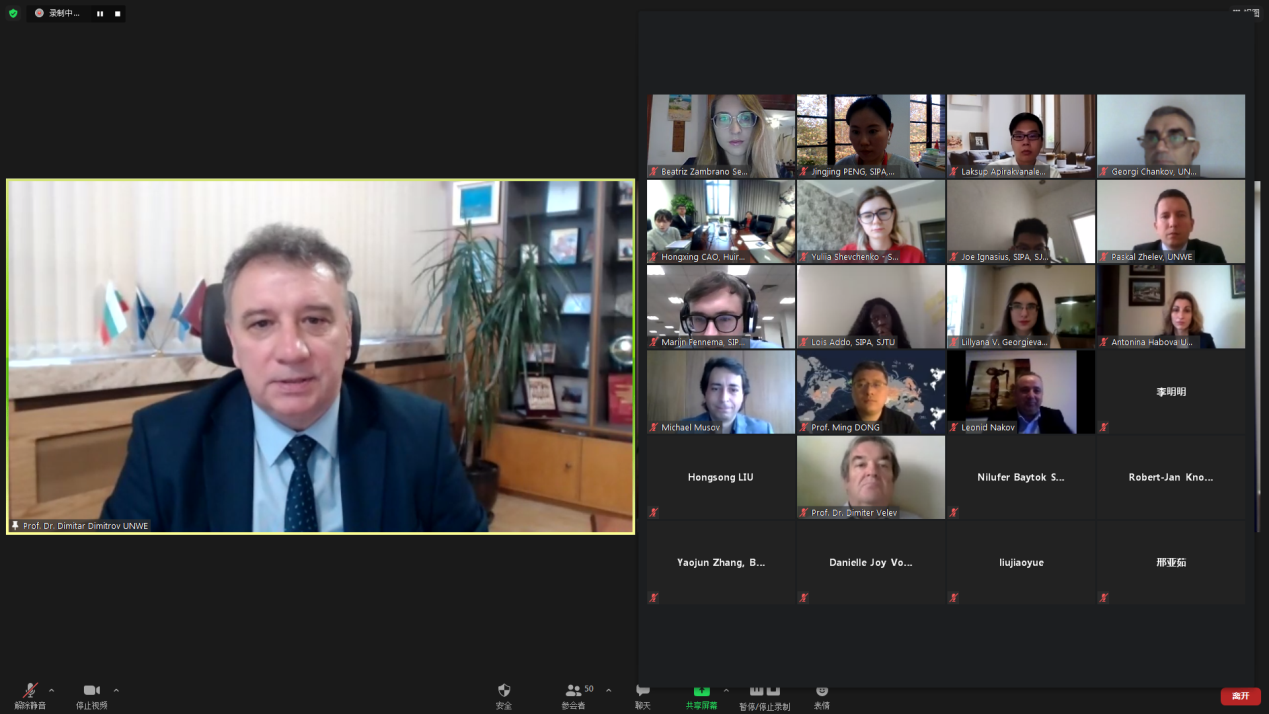 Thirdly, we heard from Mr. Dimitar Dimitrov, Rector of the University of National and World Economy (UNWE). In his speech, Rector Dimitrov remarked that 2020 is the 100th anniversary of the establishment of UNWE, and this forum was a great way to virtually celebrate not only the university itself, but also the strong partnership between SJTU and UNWE. He sincerely hopes that the cooperation between the two universities would be more diversified and in-depth in the future, and wished great success for the forum. 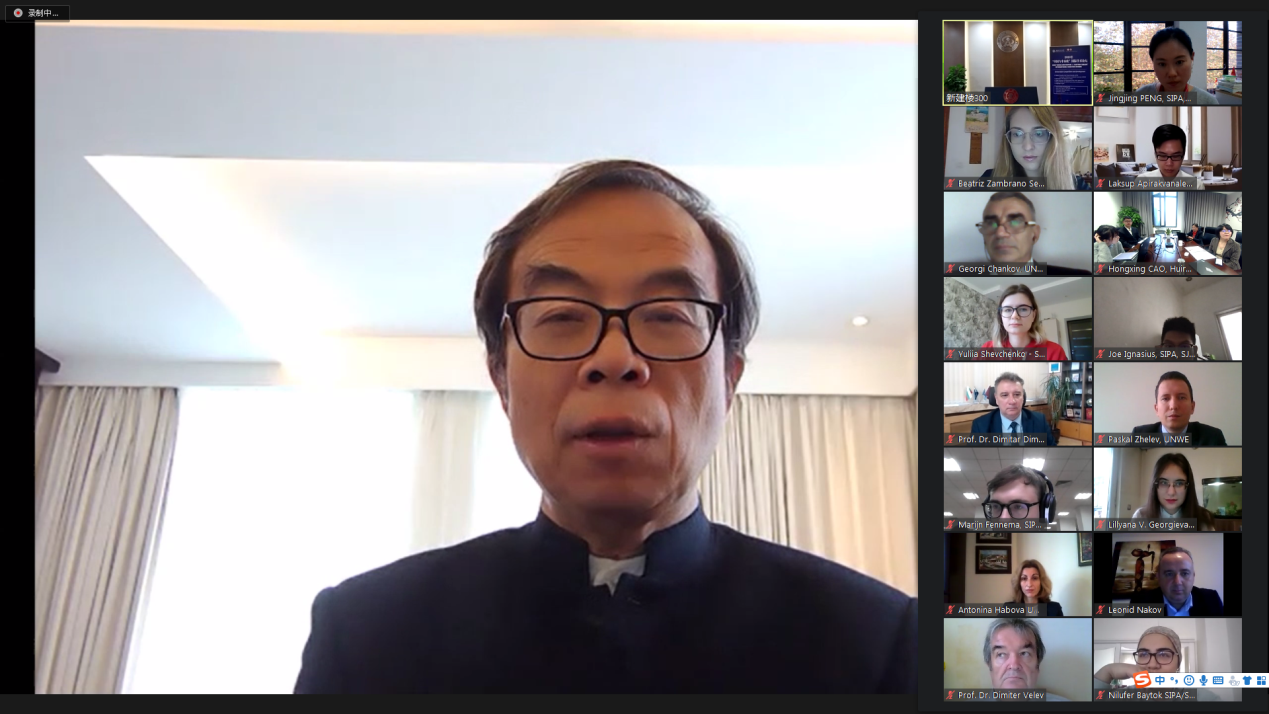 Last but not least, Mr. Ping Huang delivered his keynote address on “China-CEEC Cooperation Future”, and opened up the first round of academic discussion of the forum. 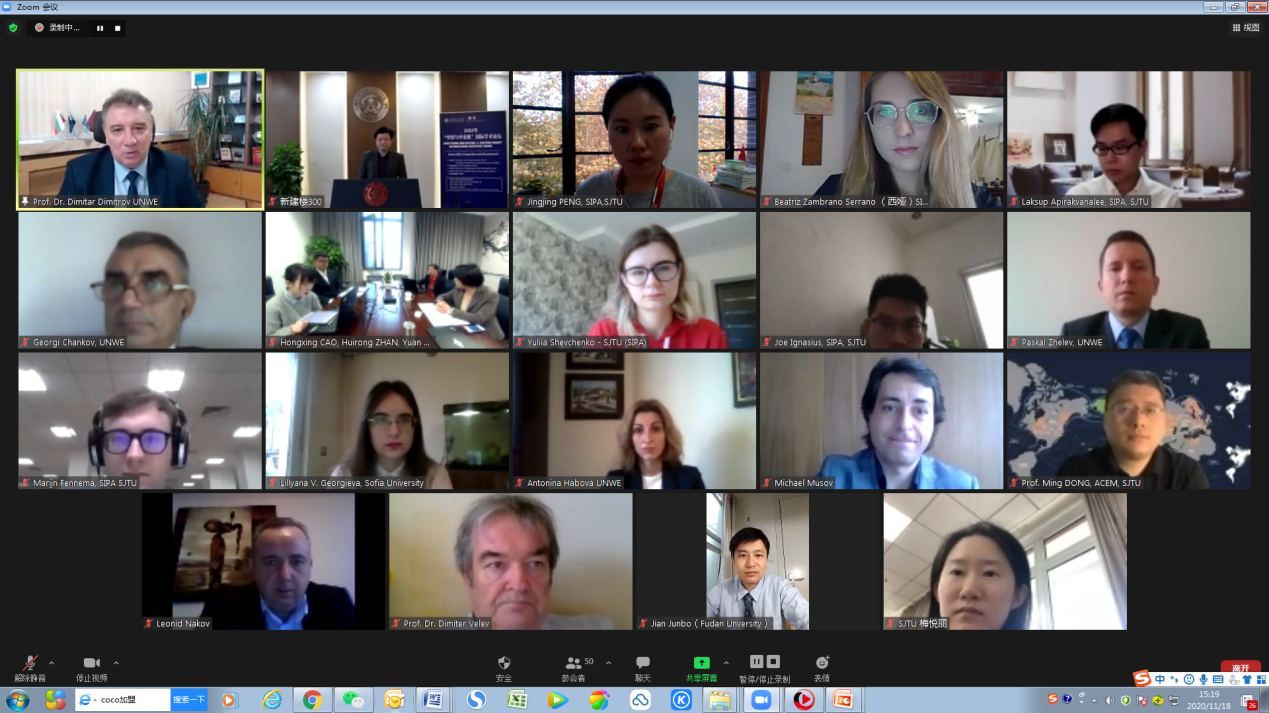 The next segment of the forum is divided into four different panels with the following topics: “Future Cooperation between China and Central & Eastern Europe”, “Rural Revitalization and Urban Rural Integration in China and Central & Eastern Europe”, “The Belt and Road Initiative and the Bulgarian-Chinese Economic Relations”, and “New Strategies for International Cultural Exchange”. 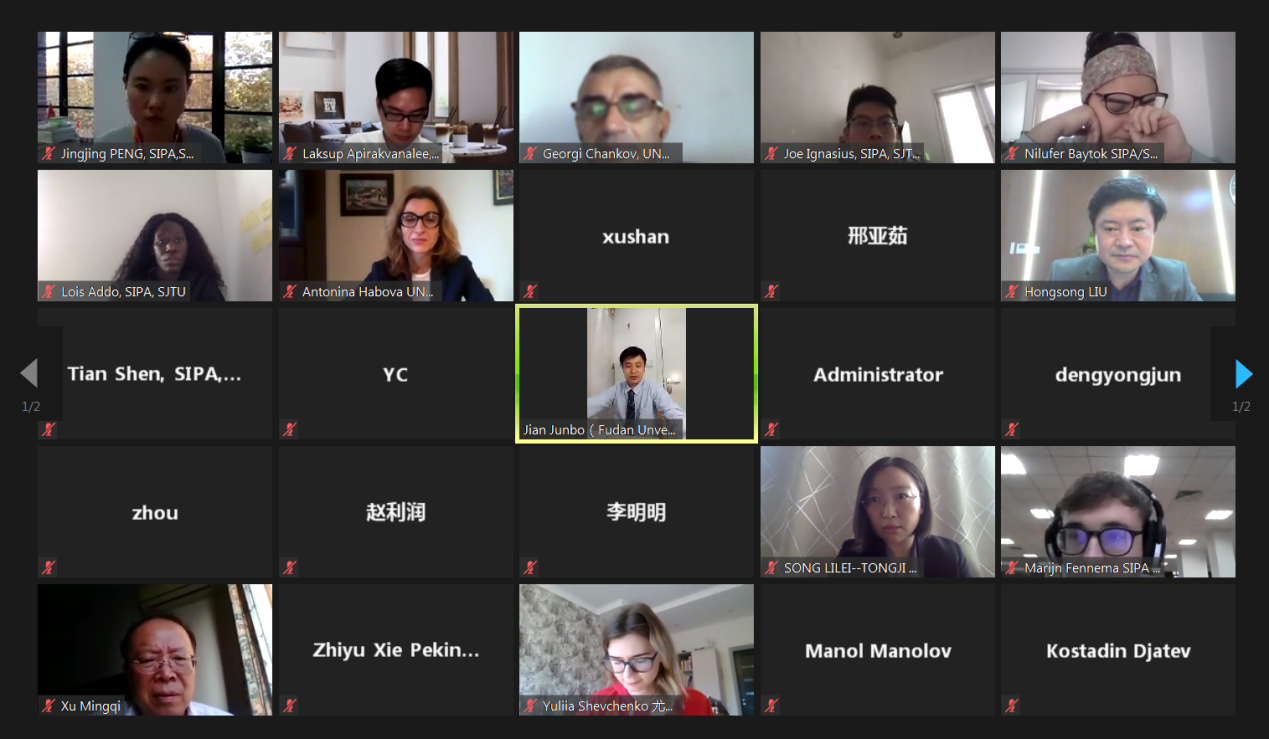 Panel one is hosted by SIPA professor, Prof. Hongsong Liu. Speakers of the session shared their research findings ranging from people-to-people exchanges between China and CEEC under the pandemic to the impact of artificial intelligence in university education. 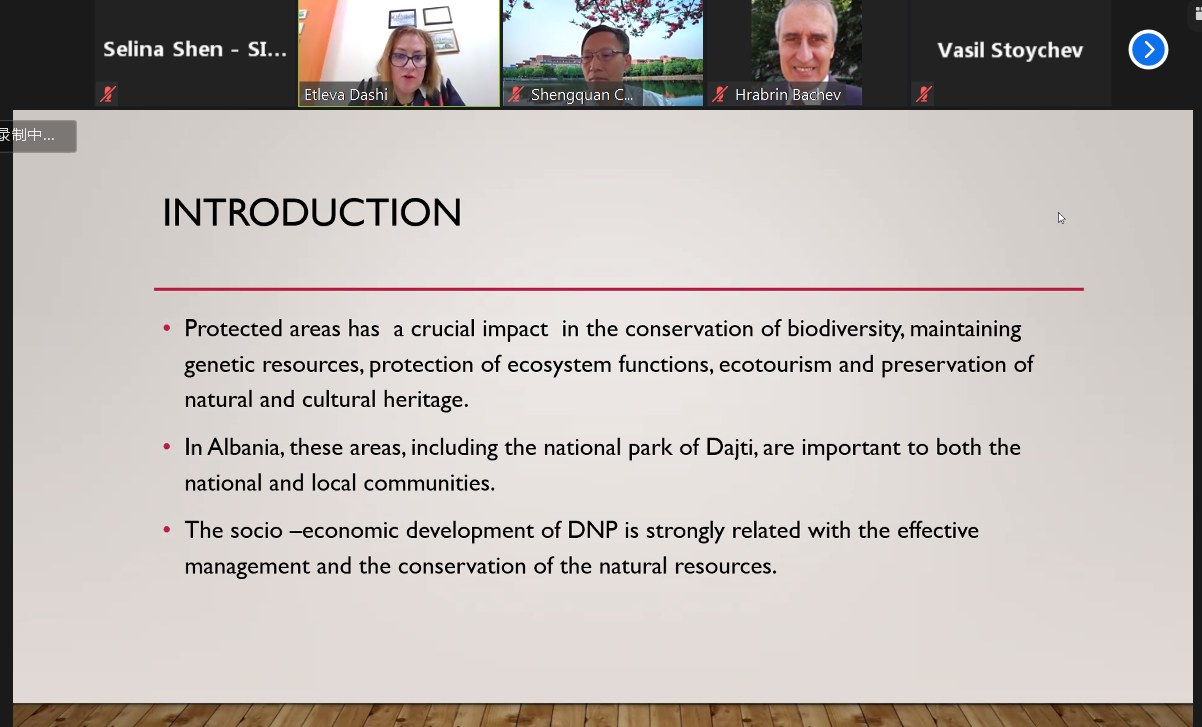 Panel two is co-hosted by Prof. Shengquan Che, Associate Dean at SJTU’s School of Design, and Prof. Hrabrin Bachev from the Institute of Agricultural Economics in Sofia. This session focuses primarily on the changing landscape of the agrarian environment around the world, as well as the impact agricultural advancements have on rural revitalization and integration. Speakers from this panel shared their insights on what is happening around different regions of the world, specifically in Bulgaria, Serbia, Hungary, Romania, and China. 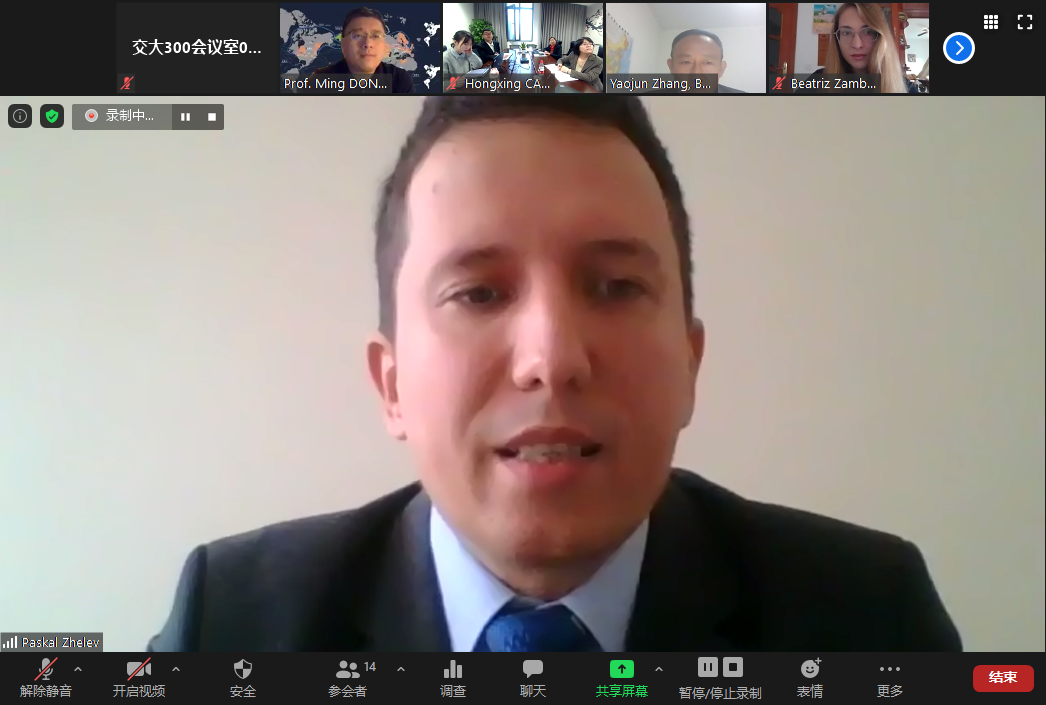 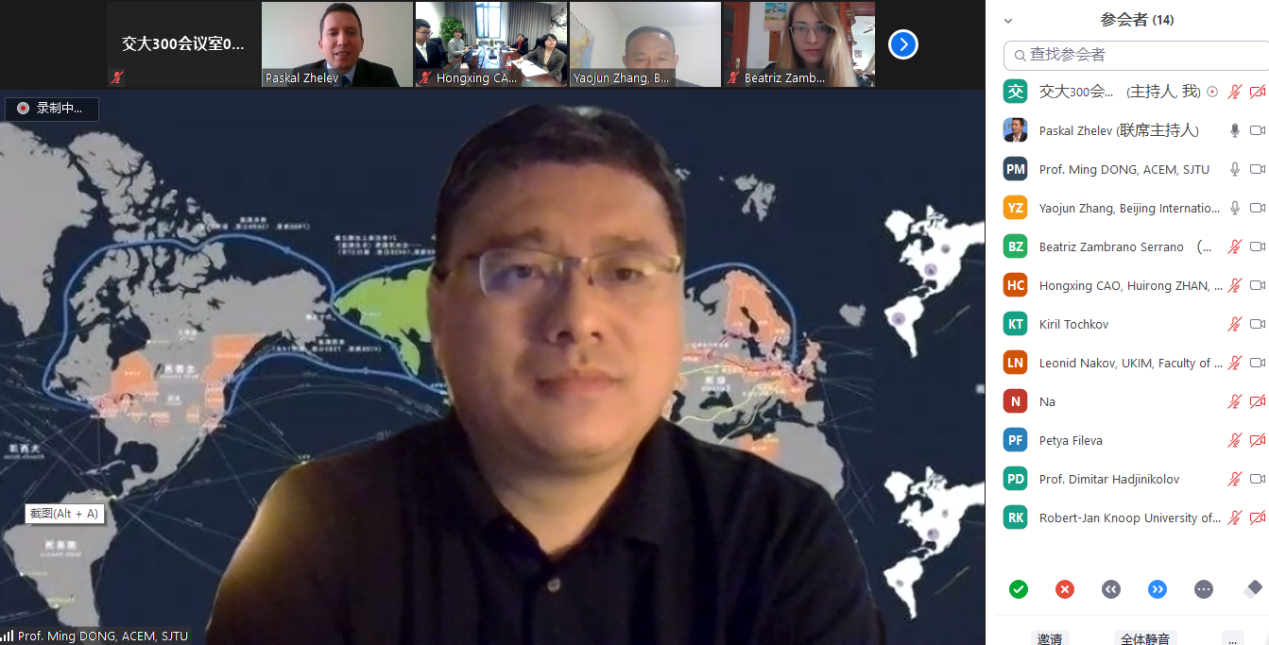 The third panel discusses the Bulgarian-Chinese economic relations under the Belt and Road initiative, co-hosted by Professor Paskal Zhelev, Associate Dean at the School of International Economics and Policy at UNWE, and Ming Dong, Associate Dean at the SJTU Asia-Pacific Graduate Institute. The panelists shared their research on the theories outlined under the Belt and Road initiative, as well as their changing landscape under the pandemic. 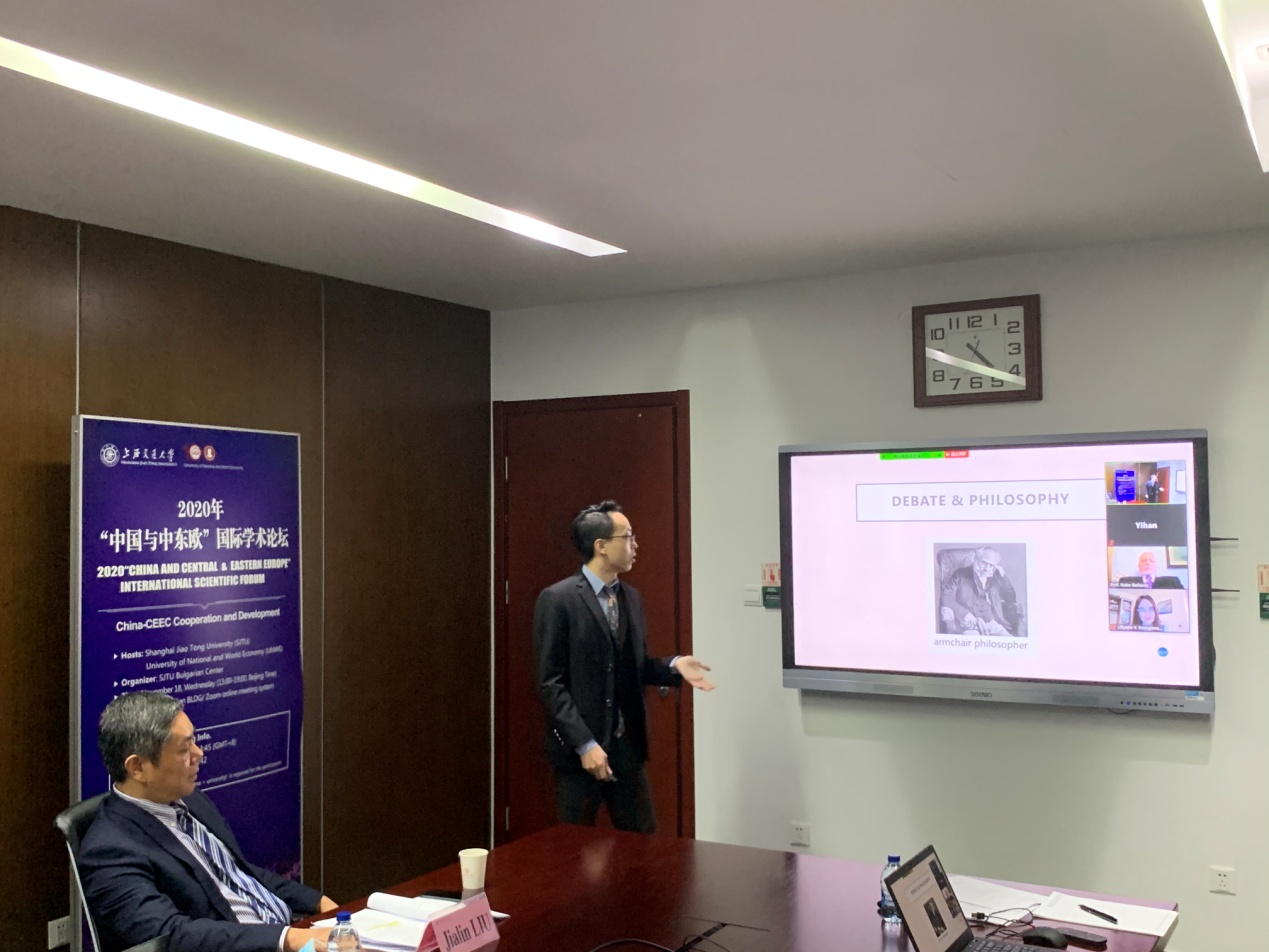 The fourth panel discusses new strategies for international cultural exchange, hosted by Prof. Jialin Liu, Associate Dean at SJTU’s School of Humanities. Speakers of this panel shared their research around how education is able to foster and deepen cross-cultural understanding.

The SJTU Bulgarian Center has offices in both Shanghai and Sofia; the work around the center overseas is currently being led by the School of International and Public Affairs. Since its establishment, the Bulgarian Center has actively responded to the call to strengthen educational cooperation, cultural exchanges, and local cooperation between China and CEEC, as outlined under the Dubrovnik Guidelines for Cooperation between China and CEEC, through myriad academic lectures and conferences, as well as international summer schools. These events have effectively promoted the in-depth cooperation between our school and universities and research institutions in Central and Eastern Europe.